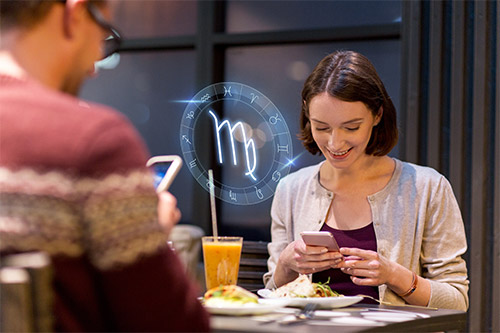 Where each zodiac can practice personal development

We’re no strangers to the common personality traits of each zodiac sign, but it might be time to dig deeper to focus in on how each zodiac sign can use their characteristics to better themselves as a person, friend, worker, and partner. Just because zodiacs are associated with certain characteristics, too, doesn’t mean we’re all limited to just being those characteristics; it’s truly what we make of it. Even on the characteristics that aren’t necessarily the pick of the crop, it’s worth it to explore how to switch it around and turn a not-so-great trait into one that brings you more joy in your life. To help serve you best on this journey of self improvement, we’ve collected a list of suggested areas of improvement for each zodiac.

While Aries can be energetic and adventurous, according to January Nelson in this post on the Thought Catalog, they also have a tendency to be self-centered and shallow based on their natural impulse to lead (which makes sense, given Aries is the first sign in the zodiac). To address these tendencies, first recognize that as an Aries, you do have a lot to offer in terms of your energy, experience, and confidence. Then, take an additional step by reminding yourself that you may not always be right or have to be first; allow yourself the time and patience to give serious consideration to others’ perspectives and point of view.

Taurus’ are known for being patient and tenacious, as suggested in Kerry Ward’s post in Cosmopolitan. In the same vein, they can be inflexible to changing plans and largely unable to see someone else’s point of view. To remedy this, you can make use of your patient nature and inclination toward deliberation by extending the bounds to include others’ thoughts, very similar to how Aries need to tackle their self improvement. Practice walking through how other people come to their conclusions while withholding judgement to allow you the opportunity to see and understand their perspective.

Geminis are sometimes known as the life of the party with their friendly and happy demeanor. This unfortunately sometimes translates to a lack of focus and follow-through, as explained by January Nelson in her article on the Thought Catalog. Geminis, this means it might be time to seriously consider investing in a planner that works for you and actually using it. Don’t limit yourself to just writing in appointments, meetings, and social meet-ups, but also make lists often about what you need to get accomplished that day or that week. Maybe even challenge yourself to extend the timeline to find a goal for the entire month or year.

Cancer is where we can find our loyal and sympathetic friends, but these same friends can easily be overwhelmed with a tendency to withdraw, according to this profile on Cancers on Labyrinthos. One of the biggest ways to address this would be to step out of your passive aggressive bubble. Recognize you are someone who needs your emotional needs to be met by the ones around you, and when they aren’t, try speaking up rather than shying away. It’s a huge step outside of your comfort zone, but it very well may lead to better, healthier relationships.

Like Aries, Leos have a natural tendency to lead and have the added advantage of charisma, and like Aries, these traits lead to occasional arrogance and an air of being self-centered according to the profile on Labyrinthos. In that way, it’s fitting to practice the same self-improvement strategies of recognizing your own self-confidence, and then giving others the opportunity, time, and chance to express themselves without your judgement.

Virgos conquer in areas of responsibility and organization, but it sometimes comes in excess and translates into obsessiveness and being critical of self and others, as explained by this Labyrinthos profile. Being obsessive and being critical are traits that are practically siblings of each other; different but still connected. In that case, let’s address the critical nature first. An article on Productivity Theory suggests writing out all the negative thoughts on paper first, because it’s when these thoughts are in your mind that they can grow into beasts that muddle up your thoughts and impact your mood.

To our Libras who are diplomatic and harmonious, something to watch out for is basing too much of your self-worth on others’ perceptions, and being indecisive, based off of this profile from Labyrinthos. Similar to what Cancers might be practicing, now is the time to start straying away from passive aggressive responses and statements. Your dislike of conflict could become a breeding ground for more intense conflict, and so addressing your passive aggressive tendencies and being clear about advocating for yourself could build your relationships to be stronger.

Scorpios are our passionate and driven bunch of individuals, but their intensity can become extreme and possessive to the point of destruction, according to this profile courtesy of Labyrinthos. Like Capricorns, Scorpios have a tendency to hold grudges for longer than anyone might imagine. While it’s a form of self protection to keep track of those who have done you wrong, it should come to a limit. When it becomes self-destructive and maladaptive to the point where you lose your sense of community, it might be time to consider the practice of giving others the benefit of the doubt. Start by adopting their perspective and withholding judgement as you do so. It’s not a crime to feel, but it can be harmful to feel so much to the point of warped perception.

Our optimistic and enthusiastic Sagittarius’ should definitely work on finding the balance between responsibility and idealism, as suggested by the profile on Labyrinthos. Unlike Aries, Sagittarius’ are great at keeping an open mind, but that can lead to the tendency to lose focus like Geminis. This lack of focus becomes problematic when a Sagittarius is faced with a large project that takes time and energy. In no outcome does optimism without work bring a large project to completion, and Sagittarius’ need to work on planning realistically, whether that’s by keeping a planner or writing in a notebook meant to organize your thoughts.

Similar to our Taurus’, Capricorns are driven and patient, but sometimes their drive can become ruthless and greedy, according to the profile on Labyrinthos. It’s hard to gain a Capricorn’s trust and they sit on the pessimistic side of perspective. In that vein, Capricorns should consider checking on their perfectionistic tendencies and address any deeper insecurities tied with that. Being driven and goal-oriented isn’t a fault, but it can become maladaptive when it reaches the point of breaking the community around you. Work on understanding your inner motivations and practice realizing and admitting your faults (it’ll definitely be hard for a long while, but stick through with it and you’ll see change).

Our sociable and intelligent Aquarius’ have the downfall of seeming aloof and goal-oriented to the point of neglecting those around them, according to this Labyrinthos profile. As fans of being in the spotlight and noticed, their actions to grab the spotlight can lead to misunderstandings and so a practice to address these communication gaps is to create a community of constructive criticism. With the sociable nature of Aquarius’, you no doubt have a community to give you the attention you need, but you also need to ensure this community can keep you in check and call you out when you need it.

Last but not least are our imaginative and intuitive Pisces. Their weaknesses include lacking boundaries and sometimes holding unrealistic expectations, based on the profile on Labyrinthos. Their giving and compassionate nature can lend to our Pisces’ being taken advantage of, so like our Aquarius, they might need to rely on their community, in this case to build them up. It’s imperative for our Pisces to find a community that genuinely cares about them to help them understand what the boundary-setting process is like. After working on those interaction and communication boundaries, you will have a better grasp on how to navigate relationships in a healthy manner.

These were just snippets of a few weaknesses commonly found in each zodiac. On a more specific front, Carolyn Steber from Bustle has a whole article on how each zodiac can improve their relationship with others. Astrology Answers also includes an article dedicated to personal development for each sign that’s worth a read. Your zodiac doesn’t define you, but it can guide you and provide context to some of your tendencies. Lean into what you’re hearing and feeling to point yourself the best direction of self growth.